In the wake of the Cambridge Analytica fiasco, Facebook ads and the allegations of Russian interference in the U.S. election of President Trump, Facebook has added additional security measures in order to thwart would-be foreign influencers who attempt to promote political posts on social media for nefarious reasons.

Namely: to influence public opinion en mass. This policy was put into place to go into effect before the 2018 midterm elections [1].

So how does the new Facebook ad authentication method work and will it actually, well, work? We discuss it from the perspective of an immigration bondsmen’s Facebook account, namely, our own.

Most of the Western world has seen Facebook’s apology ad campaign – a sort of we’re sorry, and hey, remember how important we are to your world open letter to the public. The cynics took to internet forums and likened the apology to a heartless attempt at manipulation. The ad can be seen here:

But, Facebook is not just apologizing, they are doing something about it. They have now instituted a new 2-step authentication process that must be completed to promote political posts on Facebook.

You can still post any political content you like, but if you want to create Facebook ads that promote those political posts, including anything to do with immigration, then you have to be authenticated first.

We experienced this recently, as well! Of course, our Facebook page promotes content based on immigration, because we are an immigration bond company in Fort Lauderdale – it’s what we do.

Now, you have to authenticate your personal account to create a Facebook ad that promotes a political agenda of any kind.

Here’s an example of Facebook ad we created, which was denied: 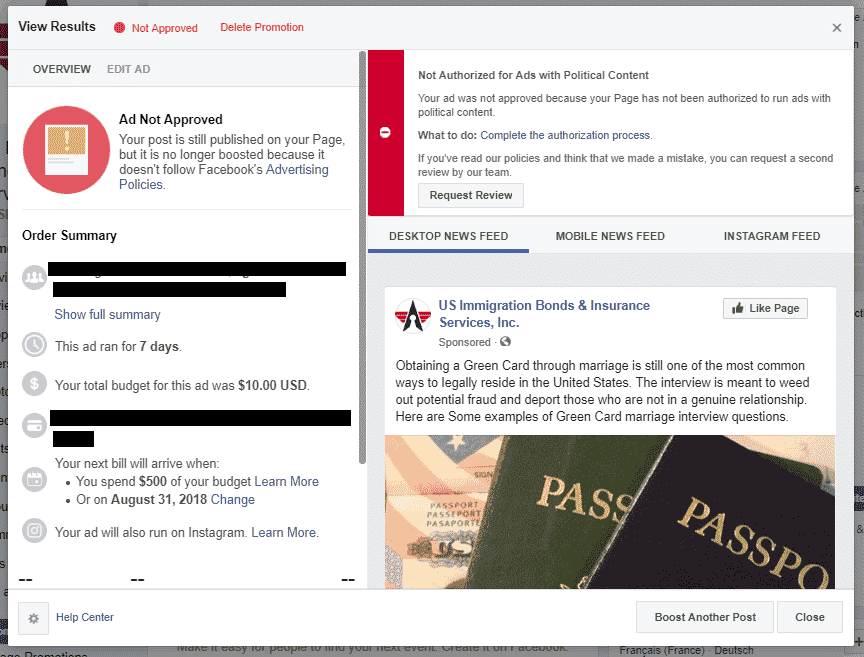 Notice the top line: “Not Authorized for Ads with Political Content”.

After seeing this screen, your next option is to request review:

Simply asking for review is not enough. 99 times out of 100, you will still be denied, and your next and only option if you want to continue to promote political content on social media will be to authenticate your personal profile. 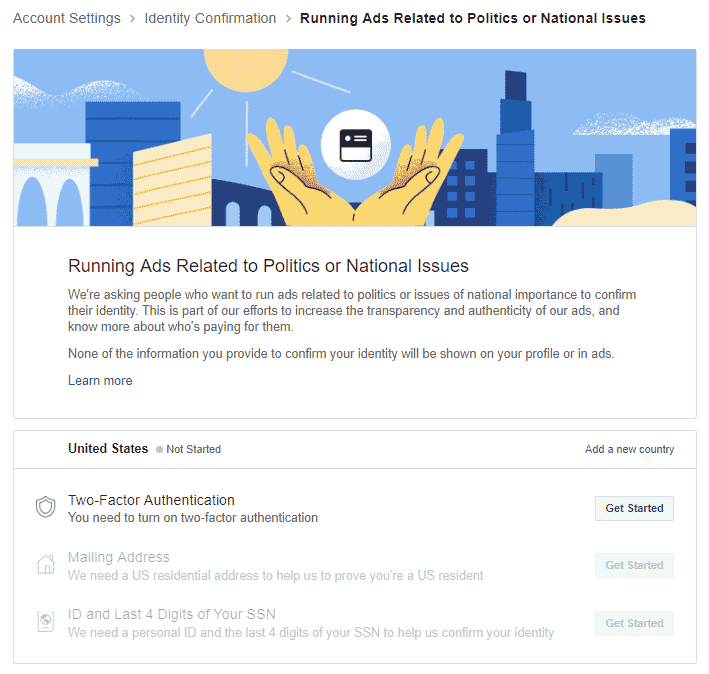 As mentioned above, Facebook ads are a hot button topic. This is not a new process either: it was put into place in April 2018.

Will This Make Any Difference?

We cannot say for certain yet. The truth is that the measure is still too new, and the problem is inherently difficult to measure. We cannot measure how much weight influence from foreign governments have had on elections in real time.

What we can measure is where political promotions are coming from; at least that’s the hope.

For more help with your Facebook ads, you can read the support page here: The Authorization Process for US Advertisers to Run Political Ads on Facebook is Now Open